A pioneer in the maintenance industry for already 50 years: MV-Jäähdytys brought the cooling industry’s service stickers to Finland, was the first to use a laser thermometer and created the maintenance contract concept, which has become common in the field. 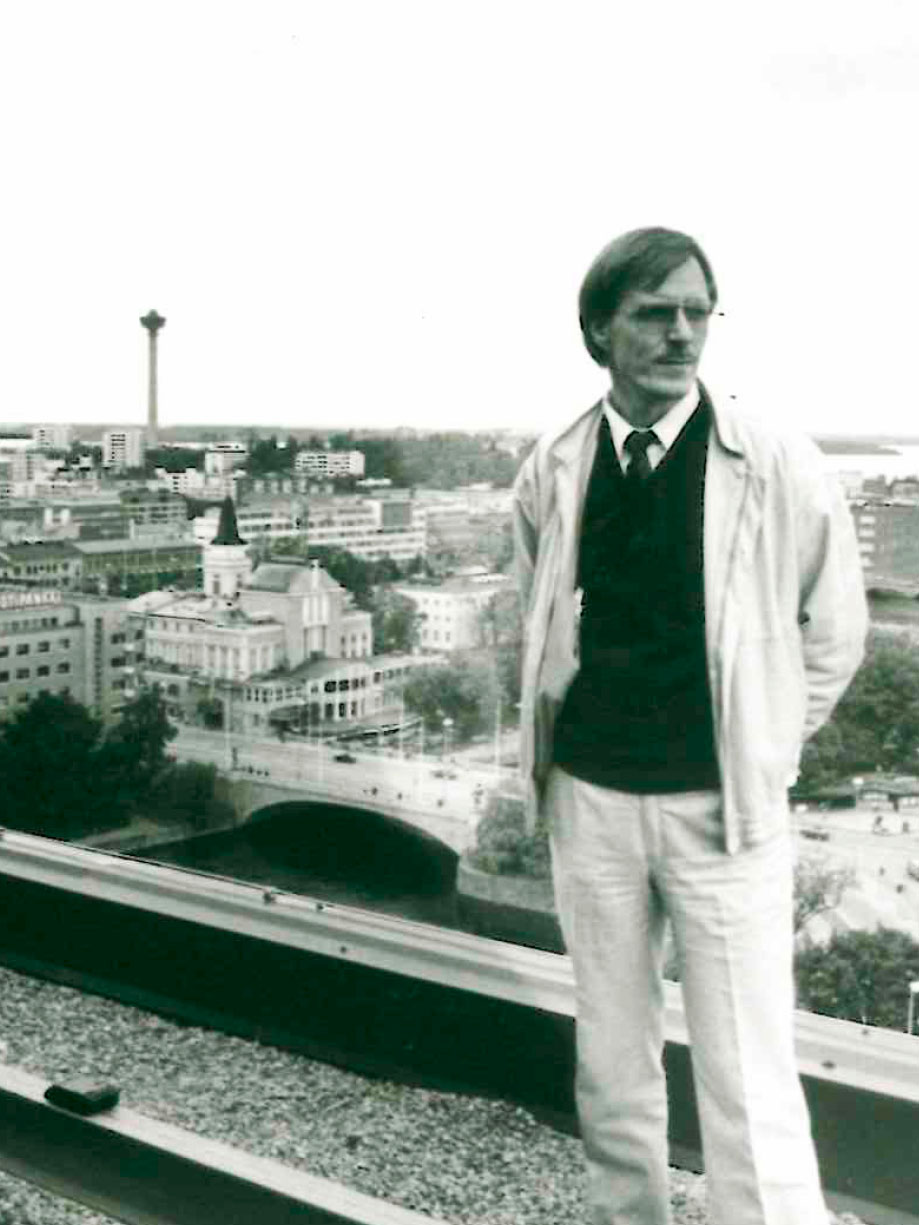 Martti Virkki finishes the cooling industries education program focused on industrial work already at the age of 16. After the army and having first few jobs, he ends up in Stockholm working for Teknokyl. The director Åke Haglund directly hands out responsible work tasks to Martti and thus shows trust towards him, which ignites an entrepreunial spark in the young man.

In their home country Finland, there is a recession waiting for Martti and his young wife. However, even that won’t hold the Virkki family back. Martti founds MV-Jäähdytys in Pirkkala on the 1st of march 1971.  The name is short, comprehensible and and it is not intentionally tied to locality or nationality.

Starting a business isn’t easy in the 1970’s. Even the arrival of a landline phone takes two weeks. Martti waits at his friend’s house so that he can receive calls. As hist first work projects, Martti installs SMK tanks all over Finland. Martti’s Swedish language skills play an important role in discussing with Swedish-speaking landlords. Martti has already 10 employees of whom some speak different languages. His English-speaking skills improve as well, and thanks to that he signs his first importing contracts to e.g., France, Belgium, and Sweden. 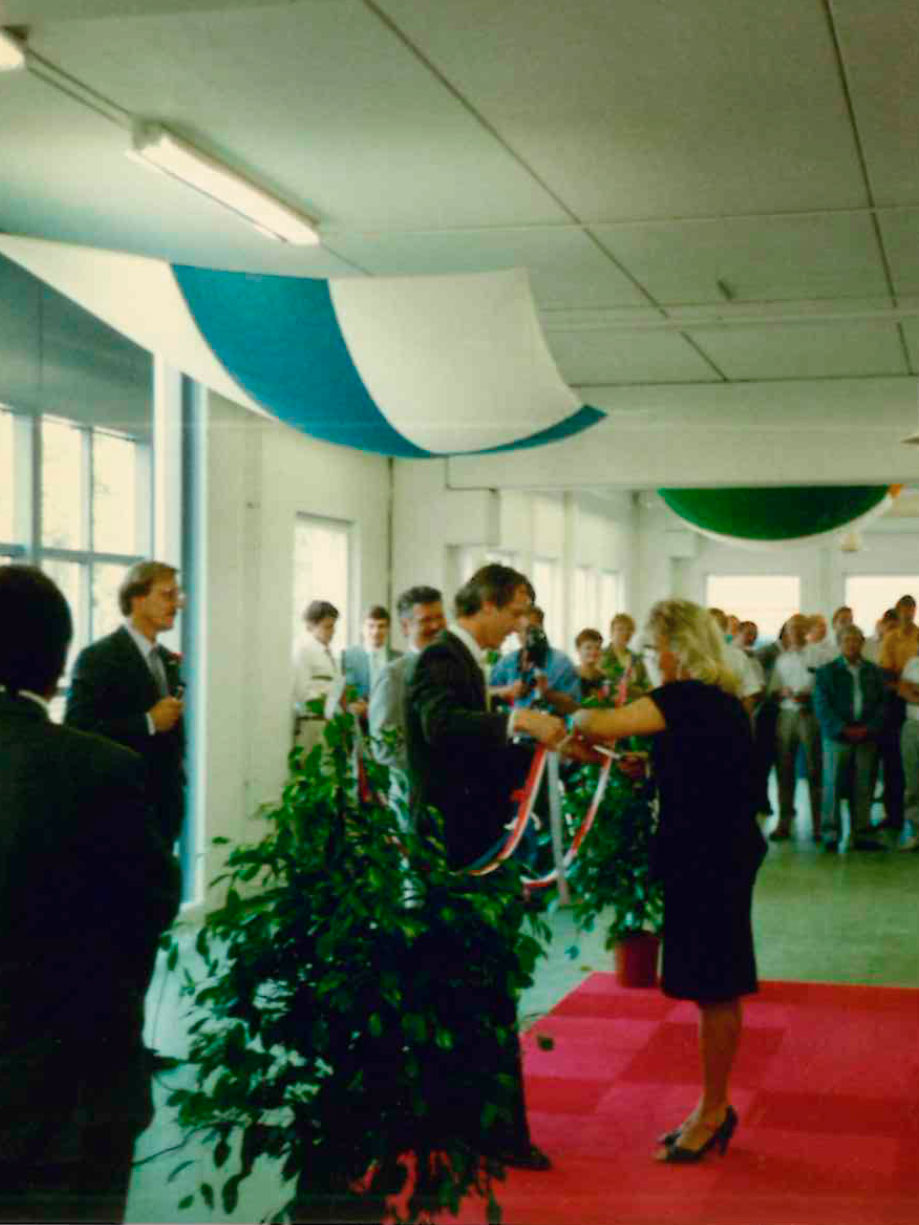 Visionary and courageous Martti is the first to bring service stickers to Finland, which have later been commonly established within the cooling industry. MV-Jäähydytys is also the first maintenance company to tape their vehicles in a mutual way, to introduce business cards with pictures and a laser thermometer, also known as the “cold man’s stetoscope”. To competitors, MV-Jäähdytys is a frightening foreign animal, but in the eyes of customer’s, it is a fascinating wild animal.

Martti notices a new market niche and starts to focus resources little by little from cooling stores towards cooling air conditioning. There is still not much know-how in Finland, so Martti goes back to Sweden for training. Visiting international trade fairs and exhibitions and networking with international prinpicals is vital, especially in the lack of phone and network lines. MV-Jäähdytys is experiencing strong growth and there are already 30 employees. The history’s first branch office is opened in Hämeenlinna. While transit connections improve, the branch office is no longer necessary. Encouraged by Hämeenlinna, a new office is opened in Helsinki, in 1989. Even today, Helsinki remains the second largest office of MV-Jäähdytys.

The municipality of Pirkkala rewards MV-Jäähdytys with a pennant in 1982.
Martti Virkki receives the prize of Pirkkalan Vuoden Yrittäjä, the entrepreneur of the year in Pirkkala, in 1988.
The Pirkanmaa regional organization acknowledges MV-Jäähdytys in 1989.
At the turn of the decade, Martti Virkki is a member of the SKLL board, creating price recommendations and terms of delivery for the cooling industry.
At the same time Martti Virkki represents the cooling industry in Finlands HVAC (nowadays talotekniikan) central association. 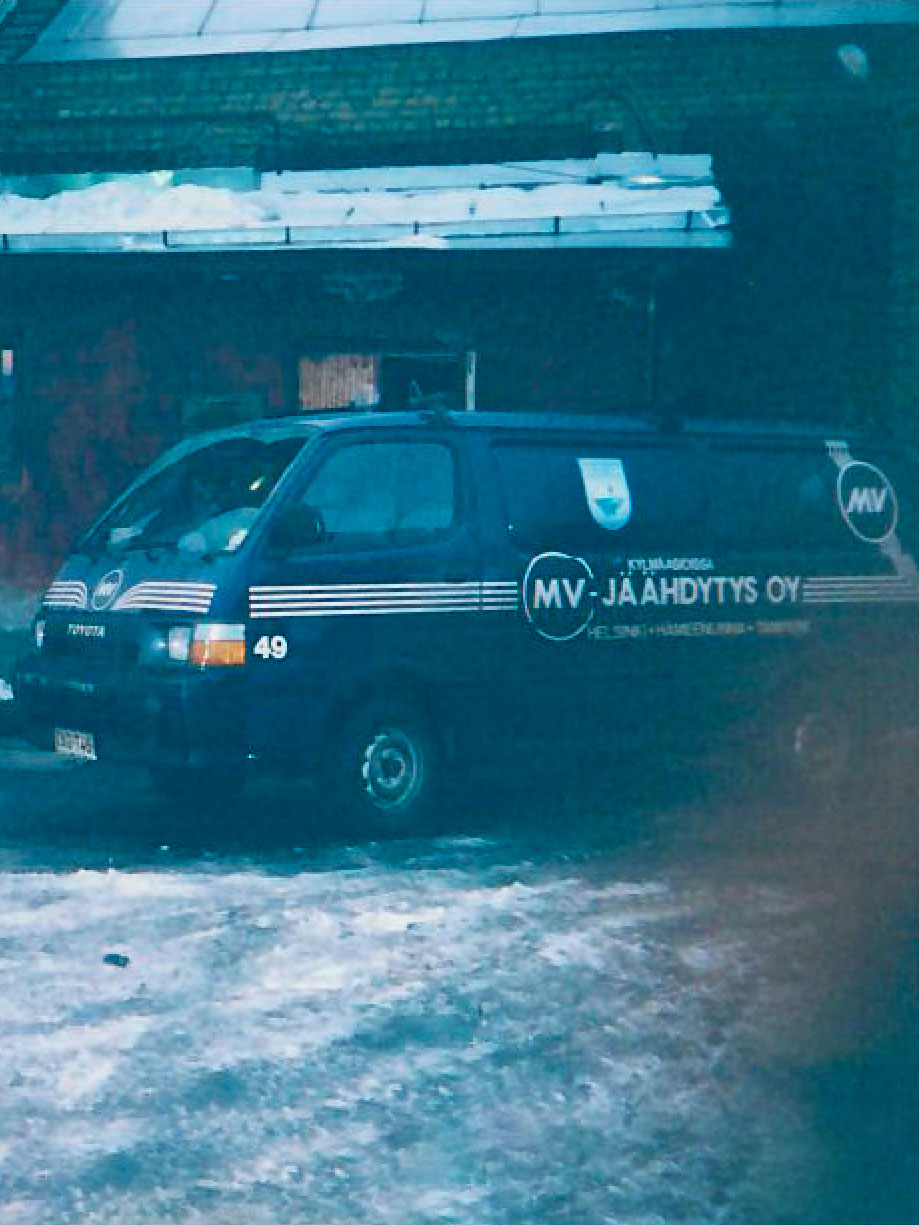 A decade of silence

During the last decade, the price levels in Finland were among the average of Western countries. In the beginning of the 1990’s there are more unemployed people than ever, and Finland is the most expensive country in the world. The strong growth of MV-Jäähdytys is interrupted when depression hits it right to the face. There are over 40 employees. The phone is dead silent. Martti who has always looked after his staff, is living through a hard and difficult time. The depression doesn’t relent. Some of the employees start their own businesses, some move abroad.

A MV-man won’t be crushed

Martti refuses to stand still. He stubbornly raises his gaze and directs it with determination towards the Baltics, which has just been freed from the Soviet Union. Finnish workers are well appreciated in the neighbouring countries. Together with his two partners, Martti founds a cooperative venture Osilia As in Tallin.

To the Baltics and St Petersburg

In Estonia, men are working hard in the beginning of the 90’s. MV’s team does mainly cooling of telephone exchanges for Osilia, but it will also be completed with the store’s wholesale. In the neighbourhood, in Klaipeda, Lithuany, cold rooms are made ready for the cigarette factory Philp Morris. A few trusted men are sent all the way to America, Canada, Iran and Kazakhstan. Big steps are taken also towards Russia. A central office called MV-Rasa is founded in St Petersburg. MV-Jäähdytys has e.g., Russia’s biggest bank Sberbank, multiple embassies, Eremitaaši museum and a St Petersbourg railway company October Railway, as its clients. After the new rise, the rubble collapses in 1988 and the operations in Russia come to an end. 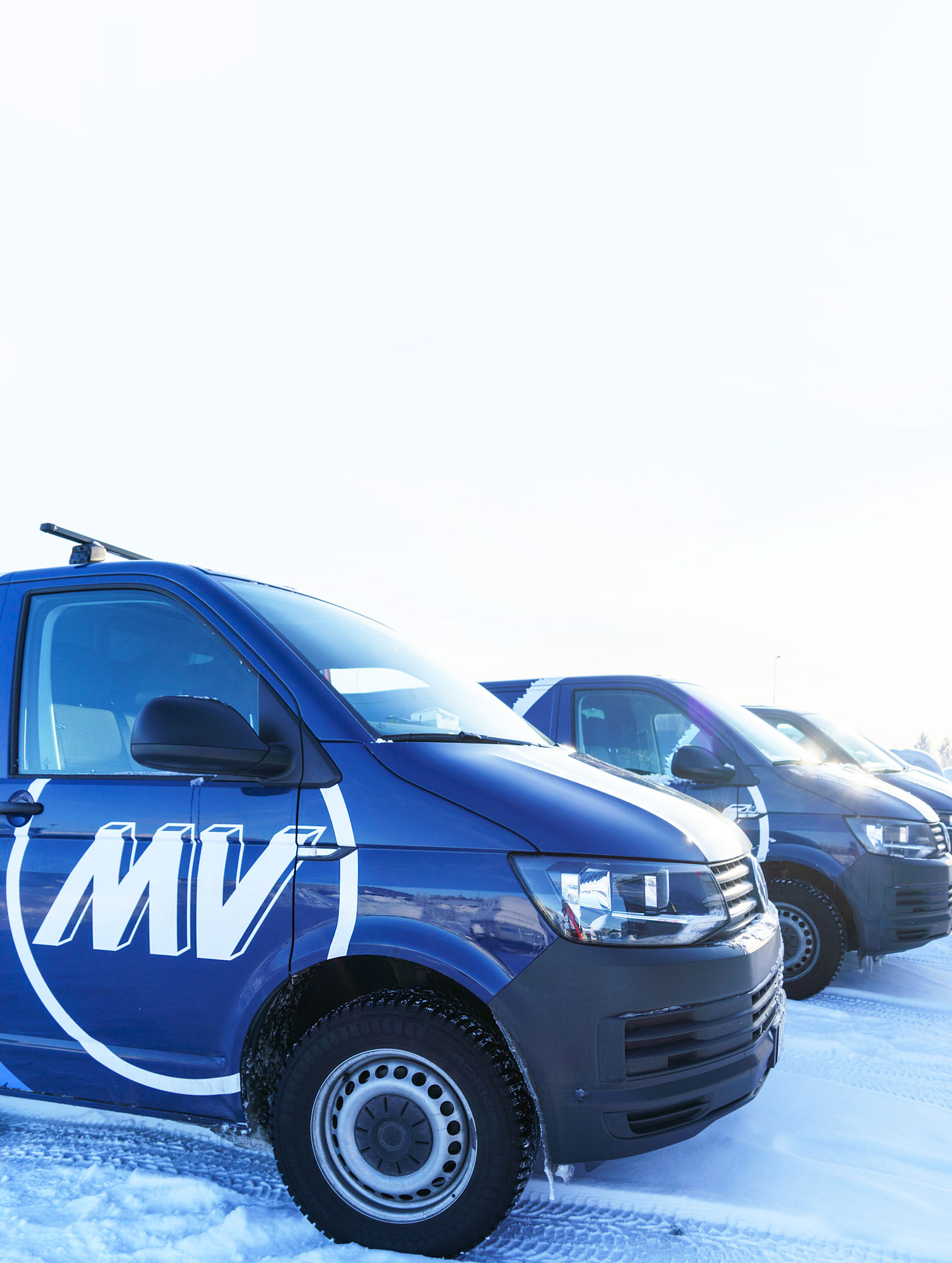 From father to son

Already another following depression took a harsh toll on the company’s economy. The new centry brought winds of change with it. Representations for brands can be applied for by telephone and email. Competition arises and a market depending on spare parts is completely reformed within the period of transition. From the five children in the family, the oldest boys Juha, Marko and Lasse, take charge of the company’s management duties.

A growing range of services

There has been a long journey from cooling stores to air conditioning cooling, complicated industrial process cooling solutions, IT-centers to cold spaces in professional kitchens, from ground source heat pumps to heat recovery solutions and all the way up till environmental control in clean rooms. There is no longer a single field of industry in which MV-Jäähdytys wouldn’t be operating. 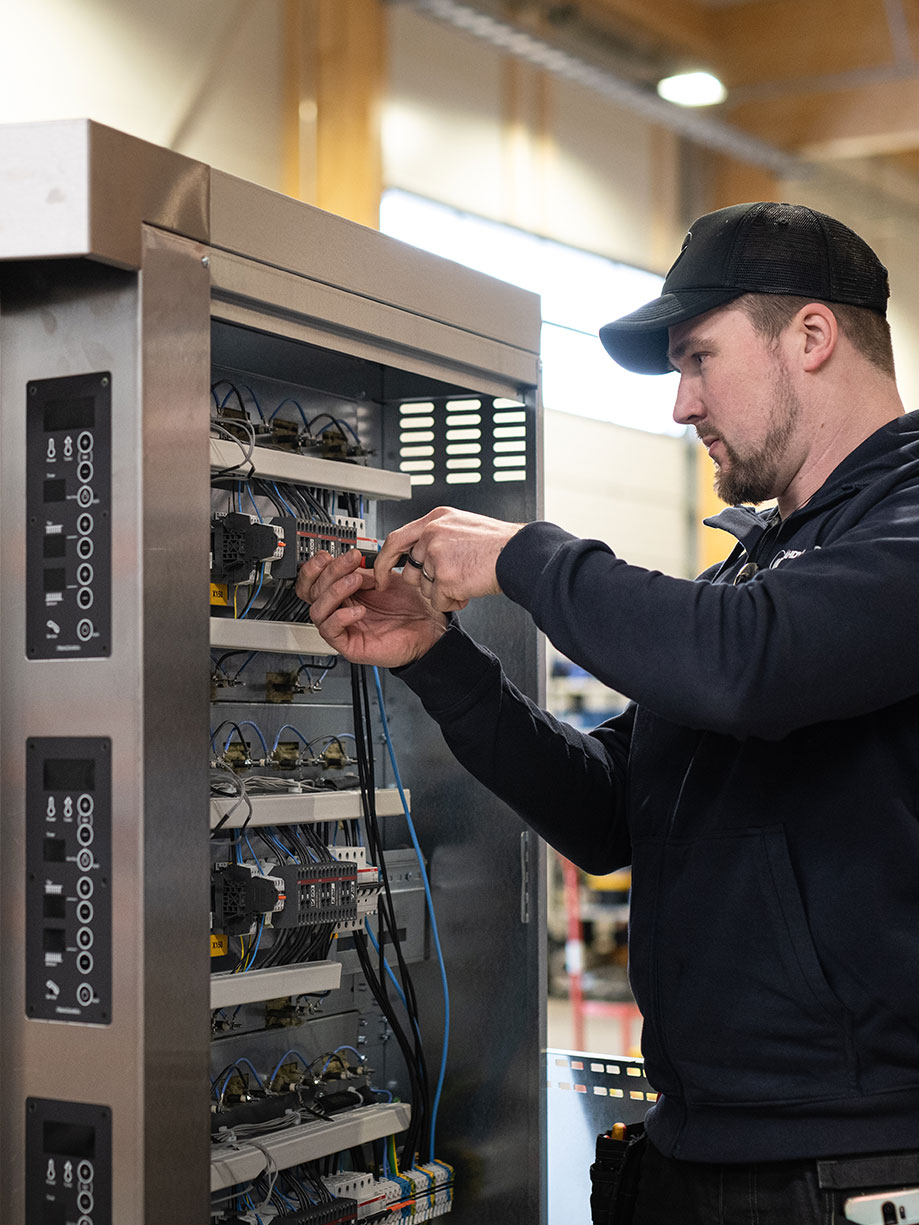 Lasse Virkki continues as the CEO of MV-Jäähdytys. Similar to Martti, Lasse is not only a leader, but a part of the staff. Lasse is fair and open, able to make fast decisions and to take sure steps where others don’t have the courage to walk. The company recognizes the natural potential of professional kitchens alongside cooling services. In professional kitchens, there are already air-conditioning cooling, as well as cold and freezer rooms. MV-Jäähdytys merges with TH-Line in 2019 and serves now in all installation and maintenance needs of customers in the restaurant and hospitality branch.

Expanding all over Finland

MV-Jäähdytys combines its forces with Huoltopalvelu Hirvonen from Jyväskylä in 2019 and Enertest from Turku in 2020. Customer service and logistics centers are now located in Tampere, Helsinki, Jyväskylä and Turku. The over 100-member team of MV-Jäähdytys can now reliably expand their range of services to become nationwide in Finland. 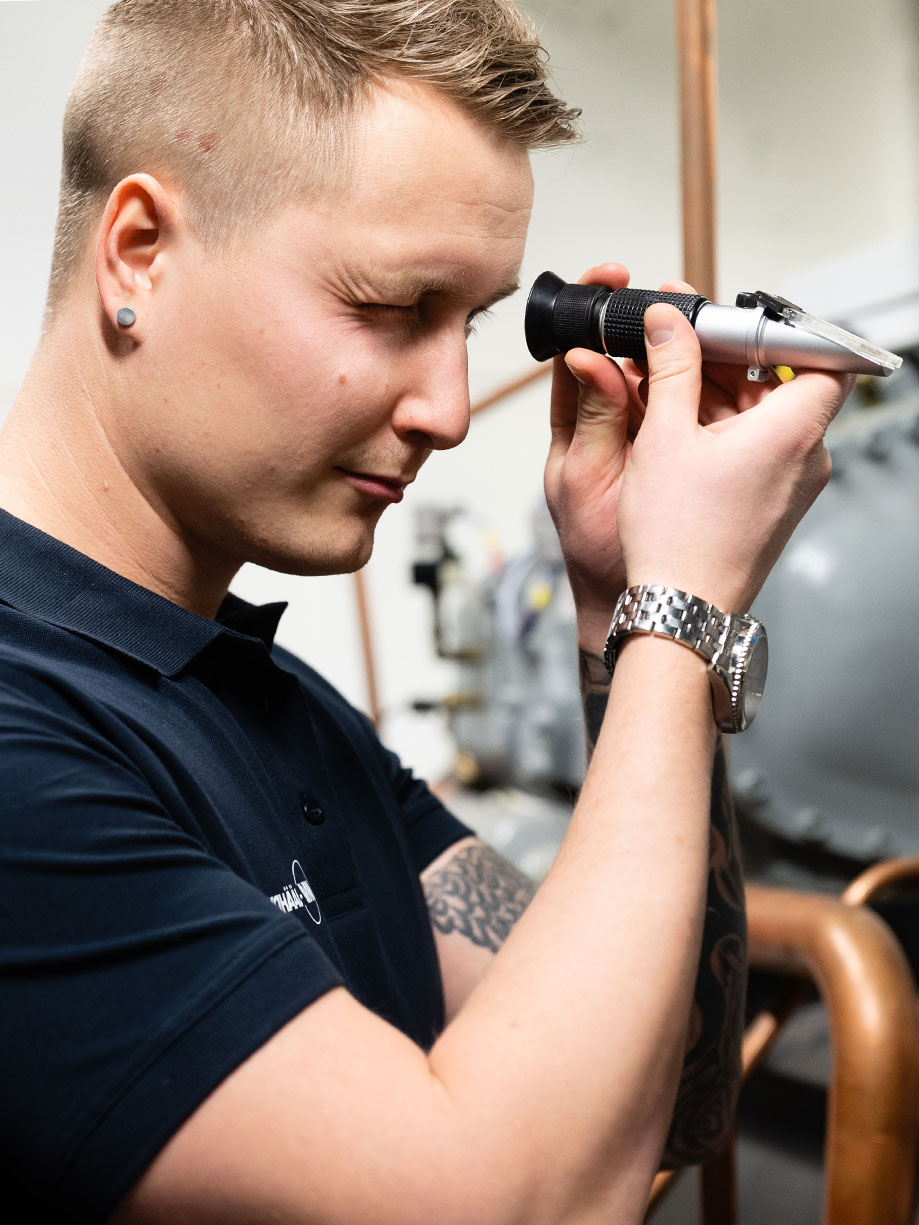 The best and biggest

The company continues its well-organized expansion and Lasse Virkki hires an experienced cold industry man Ilpo Mäkelä to join his side as CEO. He continues himself as the COO of the company and works with e.g., consultation, software development and operational analysis. In May 2021 MV-Jäähdytys joins forces with a strong company from Turku, specialized in maintaining professional kitchen equipment, Litokorpi Oy. MV-Jäähdytys preserves its title as a pioneer by releasing its self-developed, intelligent, and device specific data using ERP-system. Throughout its history, the guiding principle of MV-Jäähdytys has been to be the best maintenance company in its industry. Today, thanks to its personnel of 300 employees, MV-Jäähdytys is also the biggest and strongest company in its field.

Not a single device has been left unrepaired

The nature of the family business has been tested in such storms that a weaker one would be horrified. Mutual respect and team spirit make MV-Jäähdytys the unbeatable warrior it is today. The company is always the sum of its personnel. MV-Jäähdytys doesn’t have a single warrior it wouldn’t send to new challenges without trust and pride.

The strongest flame is lit by small sparks

MV-Jäähdytys receives the honorable mention of employer of the year in 2019.
On the first of November in 2021 MV-Jäähdytys turns 50. There is a half a century behind of responsible choices, prioritizing staff, and unyielding attitude.
Vision and courage support us year after year. 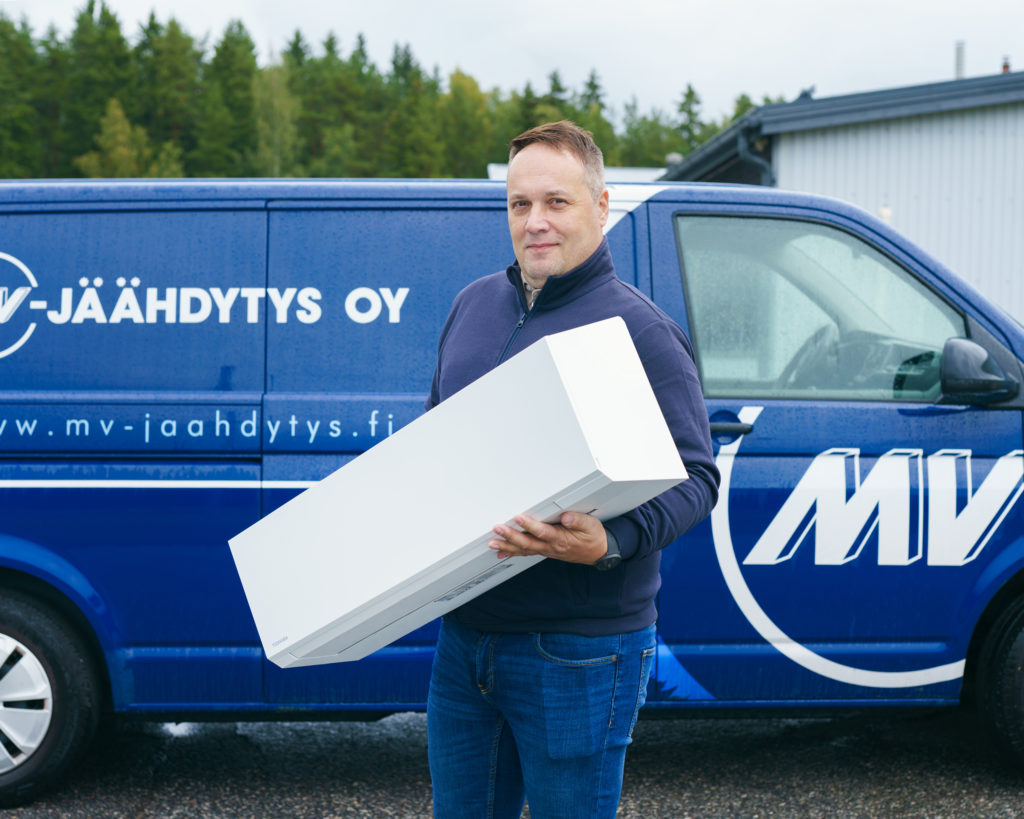 Reach out to our on-call service, we answer 24/7

Order a maintenance, we answer on weekdays between 7-16